Sorry! You missed The Kiefer Sutherland Band at Billy Bobs

Unfortunately, we don't have any information about upcoming performances of this show. Maybe we can interest you with something similar from the options below... 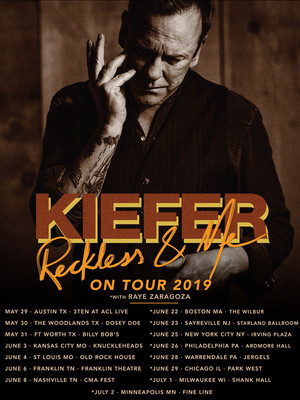 Whether capturing the beauty of his home country or sharing an open and honest letter for his daughter, Sutherland proves he's a true artist with the ability to tell his story across multiple art forms in a compelling way.

Why See The Kiefer Sutherland Band?

When he's not saving the world from imminent destruction a la high octane TV action series 24 or appearing in various Hollywood blockbusters, Emmy Award-winning actor Kiefer Sutherland has turned his talents to other vocations, from cattle ranching and competitive cowboy roping to opening his very own record label in 2002. In 2015, he crossed over from label boss to artist and started writing and recording himself, resulting in his debut album Down A Hole just a year later.

Sutherland brings his heady blend of Americana, outlaw country and rock 'n roll, to concert halls around North America to celebrate the April 2019 release of his sophomore effort Reckless & Me. Proving his chops as a storyteller, his vivid lyrical imagery calls to mind a freewheeling troubadour's journey, capturing both the loneliness and beauty of life on the open road.

Dave: “Timeless music for the soul”

Went to club regent tonight. Kiefer and his band put a smile on my face... more

Won tickets to see my favourite actor in a new role in a band! It was... more

Sound good to you? Share this page on social media and let your friends know about The Kiefer Sutherland Band at Billy Bobs.